How does satellite monitoring of the City of Jastrzębie Zdrój work, and what are its benefits?
We invite you to read the entry about our cooperation with the city. 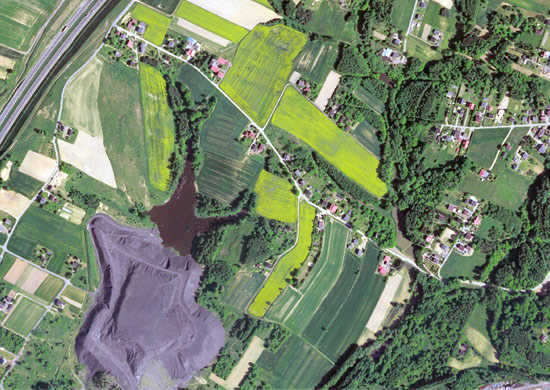 Jastrzębie-Zdrój is a city located in the southwestern part of the Śląskie voivodship. At the turn of the 1960s and 70s, it dynamically evolved into a thriving industrial center based on bituminous coal mining. Currently, it is the headquarters of Jastrzębska Spółka Węglowa (JSW SA), which conducts mining operations in four well sites, i.e.: “Borynia”, “Jas-Mos”, “Zofiówka” and “Pniówek”. In total, about 60% of the city’s area is within the boundaries of the mining areas of particular sites.

The functioning of the city is based on mining activities, but the natural negative effect of underground mining is a deformation of the land surface. Until recently, the only source of information regarding deformation was a mining company, which is obliged to make available projections of the impact of exploitation on the surface area, which are later used for planning the city’s spatial policy and developing construction requirements for building facilities. Only the institution causing the post-exploitation deformations was aware of its actual size, which guaranteed it had an advantage in the discussion or dispute on the subject.

In order to be able to assess the scale of land subsidence using an independent source, officials from Jastrzębie-Zdrój decided to turn to satellite data. Radar images obtained from the orbit are used for precise monitoring of post-mining depressions values.

The meeting with SATIM resulted in cooperation which produced maps of vertical displacements of the area with isolines of subsidence defining the characteristics of the subsidence basin.

The results of satellite measurements are published on the website of the local geoportal (http://mapa.um.jastrzebie.pl), which is a component of the Municipal Spatial Information System (Miejski System Informacji Przestrzennej), as well as through the WMS services.

The public interest in the published information confirmed the 40% increase in website visits since their presentation in September 2015.

The city of Jastrzębie-Zdrój acquires and publicly shares current information on the actual extent of post-exploitation land deformation, which brings a lot of both measurable and non-measurable effects, including:

The material was created in cooperation with the City Office of Jastrzębie-Zdrój.